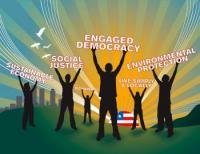 A reoccurring theme has been emerging in conversations with my friends and colleagues: our economic system.

Does our current economic system work? Who does it serve? Who is it damaging? Is it sustainable? Is there a better way? Can the system be changed?

I’ve wrestled with the underlying purpose of our financial structure for sometime. From an ecological and social justice perspective, I’ve never quite understood why we strive for affluence to the detriment of the environment and to the majority of the world’s people.

According to statistics from GlobalIssues.org and The World Bank, almost half of the world—more than three billion people—live on less than $2.50 USD a day. Additionally, “more than 80 percent of the world’s population lives in countries where income differentials are widening,” GlobalIssues.org noted.

In 2007, Forbes magazine scouted out 946 billionaires across the globe—from Mumbi to Serbia to Madrid to Cyprus. “Ingenuity, not industry, is the common characteristic” among the rich, the article noted.

“These folks made money in everything from media and real estate to coffee, dumplings and ethanol,” according to Forbes. “Two-thirds of [2006’s] billionaires are richer. Only 17 percent are poorer, including 32 who fell below the billion-dollar mark. The billionaires’ combined net worth climbed by $900 billion to $3.5 trillion. That equates to $3.6 billion apiece.”

Regardless of Forbes boasting, wealth is not proven to make us happier, which annuls any happiness argument for attaining material prosperity.

David Korten, a former Harvard Business School professor and author of the 2010 book Agenda for a New Economy: From Phantom Wealth to Real Wealth, refers to the current financial system as “structural violence.” Korten posits that violence is built into the very structure of our dominant institutions such as our financial markets, economic institutions, global corporations, and political system.

Structural violence ensues when information and technology are monopolized by a few and then held ransom to people who may need it; when access to food, water, and other natural resources are controlled by those in power; when quality education is unequally distributed; when political agenda’s are prejudiced by money markets, and so forth.

In a PeaceWeek 2011 recording titled The Peace Economy, Korten said, “The very structure of our economic institutions are devoted solely to maximizing financial return without regard to the human and natural consequences. …These [economic institutions] are structurally designed to destroy the environment, to concentrate wealth to the exclusion of the majority of the world’s people, and to corrupt even our democratic political systems by making them captive to financial interests rather than to human interests.”

A dominator economy is set up as winner-takes-all competition for power and for the world’s wealth. The wealthy get richer and those in power gain greater control. The middle class, however, disappears. The poor get more destitute and the biosphere suffers massive long-term devastation.

Eventually, we all lose. Korten submits, “It’s a system that’s not only guaranteed to spread violence, but ultimately to self-destruct.”

The good news is we have alternatives. The first step towards change is to understand how the system works and then, as Korten said, “recognize that there’s nothing inevitable about it. It’s a result of human choice.”

We can change our story. Imagine an ecocentric “ecological economy” where the purpose is to balance human needs with biosphere needs. Imagine a system of self-organization, self-reliance, self-determination, and collaboration. Imagine a system that values an ecological sense of self and reciprocity with Earth.

Korten explained, “Part of the ideal is a world in which every person is participating in the ownership of productive resources and productive enterprise in their homes. Not in the abstract sense of a socialist system, but in the very real sense of a community based system where you actually have an ownership stake in real enterprises, like local farms in which your local livelihood depends.”

In this new story, “real wealth” is life, happiness, loving families, health, caring communities, and life-generating environments. “Money is just an account accrue,” Korten said. “It’s just a number and should not be confused with the real wealth of land and talents, happy healthy children. Peace is a real wealth.”

In his 2010 book Civilizing the Economy: A New Economics of Provision, author Marvin Brown wrote, “If we are to replace property relations with civic relations, then we need to replace the exclusive focus on individual gain with a relational notion of reciprocity as the basis for the economy. We need to restore reciprocity as the moral foundation for making provisions.”

Brown added that when we think about the ethical aspect of our economic framework, “the ethical is largely located either in the individual persons, or in relationships among persons outside the market. As long as we interpret persons and the planet as property, we will continue to lose valuable time that we need to redirect our economy toward a just and sustainable future.”

Brown noted, “Civil society includes all of us as global citizens.”

Both Korten and Brown agree that our new story can redefine value from money to life. The new story can be grounded in human freedom or dignity and civic membership instead of property; it can focus on local markets and ecological integrity.

Clearly, as stated by the New Economy Working Group, this new system “will require an accountable, service-oriented system of money, banking, and finance based on values, rules, and institutions very different than those currently in place.”

Business author and consultant Peter Block once said, “The system comes to know itself both as it is and as it can be.”