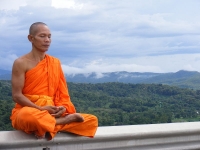 These mysterious Sanskrit words are actually very familiar to many long-time yoga practitioners. They constitute the second line of the Yoga Sutras of Pantañjali and explain the ultimate purpose of yoga: to cease, or at least control, the fluctuations of the mind. So it might come as no real surprise that a new study (Visceglia & Lewis, 2011) has shown yoga therapy to be an effective adjunct treatment for patients diagnosed with schizophrenia.

Visceglia and Lewis’s (2011) study measured the symptoms of 18 “clinically stable” patients before, during, and after an eight-week program involving yoga asanas, or postures; yogic breathing practices; and relaxation. After eight weeks, the yoga therapy group showed significant symptom improvements compared to their “wait-list” control group counterparts who did not practice yoga.

This “randomized and controlled” pilot study, published in a non-yoga journal—the Journal of Alternative and Complementary Medicine—starts to give yoga some of the “credibility” in the scientific, medical-model Western world that it already has amongst yoga practitioners who have experienced the practice’s mind-changing abilities first-hand.

While schizophrenia contains a whole cluster of symptoms for a full psychiatric diagnosis, according to the DSM-IV-TR, disorganized thinking “has been argued by some to be the single most important feature of schizophrenia (American Psychiatric Association [DSM-IV-TR], 2000, p. 298). So if yoga’s primary purpose according to Pantañjali is to calm those fluctuations of the mind, it would seem obvious that yoga could “treat” what the DSM-IV-TR labels “disorganized thinking.”

But first we have to see where the words in the texts meet the personal, embodied experiences.

We also have to understand that when Pantañjali is talking about the citta—the consciousness or mind—he is not referring to Western concept of mind ensconced in the brain. B.K.S. Iyengar (1993) explains that for Pantañjali, this citta includes the mind, intelligence, and ego, and this citta permeates multiple layers throughout the body—it is not just the brain, because the brain is only a part of the mind—an organ directing action and thought. Hence, we begin to have a more of real sense of mind-body, not just a linking of two disparate entities.

Merleau-Ponty also captured this sense of the mind-body functioning in relation to the world. Morley (2001) says that by bringing Heidegger’s ideas to the body, Merleau-Ponty refined the idea of Dasein. Merleau-Ponty referred to this revised notion of Dasein not as Being-in-the World as Heidegger did but as Flesh-of-the-World, to capture the interplay of mind and body working together (Morley, 2001).

And this seems to be closer to what participants in Visceglia’s previous yoga and schizophrenia studies noticed in their experiences. Visceglia (2007) describes some case studies of schizophrenia patients in a state psychiatric hospital in the Bronx, NY. One 52-year-old man, described as vacillating between intelligible and approachable to illogical and prone to outbursts of temper, volunteered to show up to a weekly yoga class on the ward. The researcher reported that not only did he attend regularly but he also requested from her more challenging postures to practice (Visceglia, 2007). After one session, he told the researcher, “After yoga, I can feel my feet touching the ground more” (Visceglia, 2007, p. 95).

Indeed, it is this sense of groundedness, as Visceglia (2007) rightly points out, that helps lead to a feeling of connection and relatedness. She notes that many patients diagnosed with schizophrenia have often reported feelings of disconnection.

Visceglia (2007) also describes another case in which a 43-year-old woman felt she had bugs flying around in her brain, poison in her blood, and fish in her intestines, as well as visible chronic muscle stiffness. This woman’s yoga practice helped her learn to focus on other sensations in her body so that she gradually gained a greater awareness about what was really going on inside her body. Eventually, this helped her to communicate her feelings more accurately and become a better advocate for herself with the medical staff (Visceglia, 2007).

A key in this approach is that the yoga therapist did not deny or dismiss her original descriptions of her sensations. The therapist did not tell her, as far as we know, that bugs were not actually flying around her brain. Indeed, this description could be yet another metaphor for the yoga sutra discussed above—describing the feelings of the fluctuations of the mind—those that yoga helps to quell.

Visceglia and Lewis (2011) said that their research is only a pilot study, a starting point for further research, since with only 18 participants, few generalizations can be made. But they have laid the groundwork for what can potentially become an invaluable healing tool not only for those diagnosed with schizophrenia but for anyone suffering from “citta vṛtti,” fluctuations of mind.

And with yoga and schizophrenia, the healing relationship between the two is evident in the language itself. Since the word yoga itself comes from Sanskrit root “yuj,” meaning “union” (Iyengar, 1993), while the word schizophrenia comes the Greek words meaning “broken “and “mind” (Szasz, 2005), yoga here can be said to help to reunite the pieces of the broken mind.