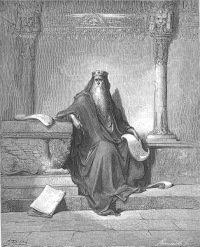 There isn’t an “app” for the Wisdom of Solomon

The first American baby boomer reached retirement age this year.  By 2030, one-in-five Americans will be a Boomer past 65.  This “silver tsunami” as it’s been called, will carry much of what we know about American culture with it:  when one-in-five people are over 65, our economy is just one aspect of society that will warp around the caring for the elderly. How we organize our cities, build our buildings, and spend our resources will follow.

Or it could follow.  The problem is that we live in a culture obsessed with youth, and with technological fixes.  The one makes it difficult to even see, let alone confront, what it is to grow older.  The other makes it difficult to address aging on a human level — where it really matters.

A fascinating article about MIT’s “AgeLab” describes the problem and the cutting edge technological fixes that are being developed:  cars augmented with sensors to help support elderly drivers;  shoes to improve mobility and balance;  tricked-out home appliances to make it easier to live independently (such as the e-trash can);  electronic pets to provide something for the elderly to care for (does that seem creepy to you?);  and improved exercise machines.

Yet even Joseph Coughlin, AgeLab’s founder, clearly knows that technological fixes are far from enough.  As the article notes:

Yet Coughlin balks at the idea that technology alone can solve the many problems thrown up by an ageing population. Instead, he argues that every social and economic institution – from transport and housing to education and commerce – must be reinvented, especially if many millions more are to avoid the indignity and expense of a final trip to a nursing home. “We need a vision that says ageing is not just about the frail. Ageing is about all of us, and how we keep people productive for as long as possible,” Coughlin tells me. “What we’re left with is a crisis, where we’re using yesterday’s social and policy models to address today’s new ageing population. It is a fundamental disconnect.”

But the idea that this can be a social solution misunderstands the psychological issues at the heart of a youth-obsessed, technology-obsessed, culture.  An innovation driven economy combined with an obsession over youth means that most people are not capable of looking aging in a realistic way.  For all that we continue to spend more money on nursing homes, nothing in our culture prepares people to accept the inevitability of aging and death, or to prepare for the tragic in life.  Even mainstream psychology sees providing quick-fixes to symptoms, rather than a mature and relevant perspective of life, as its old standard (no insurance company ever paid for a mature and relevant perspective).

But without that psychological underpinning, without an ability to navigate the existential truths of mortality, no clever technological fixes or social arrangements will be up to the task.  To age gracefully, a mature psychology mus take on our obsession with youth … and it must win.