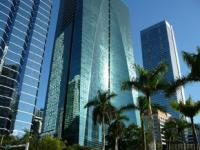 Every time I drive through downtown Miami, it strikes me how much the skyline’s changed during the past 25 years.

The sparse city center forever immortalized in the 1980s by Miami Vice is now a mega-metropolis densely populated by condos and skyscrapers—monolithic structures of steel, concrete, and glass glistening off the waters of Biscayne Bay in the hot sun.

And they continue to rise, year after year.

What I—along with several thousands of other Miamians—didn’t know was that most of these new edifices are eco-friendly. From energy-saving reflective roofs and air-conditioning systems to lights that adjust themselves depending on the amount of daylight entering their heat-dispersing windows, downtown Miami’s greening.

If you’ve ever visited Miami or spoken with its true locals (those of us who remember when Dan Marino and the Dolphins played at the Orange Bowl), you probably know that the one thing us natives do most here is… no, not visit South Beach. That’s for tourists and people who’ve moved here for the night life. What us Miamians tend to do most down here is spend our time—on workdays and weekends—stuck in exceedingly, heavy traffic watching the fumes of gas-guzzling SUVs evaporate in the heat.

Downtown’s apparently changing though. It’s becoming sustainable—a word I never really thought I’d use to describe Miami. See, ’round here, sustainable practices are usually adopted in more affluent neighborhoods rather than by the city and Miami-Dade County as a whole.

The city of Miami’s change, it seems, isn’t limited to the downtown area. It’s supposed to spread throughout the city through plans introduced by Miami’s Office of Sustainable Initiatives, which was launched in 2006.

According to a climate action plan developed by Miami’s Office of Sustainable Initiatives, by 2020, the city of Miami expects to:

“Over the next century, escalating greenhouse gas emissions threaten to dramatically increase the earth’s temperatures and raise sea levels, making Greater Miami one of the most vulnerable urban areas in the world,” according to the Miami’s Office of Sustainable Initiatives’ climate action plan. “If climate change proceeds unmitigated, living in Miami will become extremely difficult, if not impossible.”

I thought it already was “extremely difficult, if not impossible” to live here. I mean, sitting in your car on congested SR 836 at 2 p.m. in 90-degree heat is no picnic.

Am I skeptical of Miami’s greening initiative? Yes, I am. While I applaud the effort, I’m skeptical about it and its potential success because an important step in the process appears to be missing: awareness.

Ask a Miamian living in one of the city’s impoverished areas as well as a working-class or middle-class neighborhood about sustainability and you might get a blank look. In the county ‘burbs, that question may elicit the same response.

To Miamians in the city and the county, sustainable practices are limited to placing plastic bottles in our blue recycling bins and maybe, just maybe, buying an energy-friendly light bulb… though that’s probably rarer than the recycling because those bulbs are more expensive.

Whenever I’m in San Francisco for Saybrook’s residential conferences, I’m always made aware of sustainable practices in some way, shape, or form the minute I walk off the plane at SFO.

During my travels over there, I’ve been asked if I tend to use paper cups or a reuseable travel mug whenever I buy coffee at Starbucks. I’ve been asked if I used paper, plastic, or reuseable cloth bags for groceries. I’ve been offered incentives by the hotel for reusing towels and adopting “green” practices. In a nut shell: Whenever I’m in San Francisco, I’m made conscious of my daily practices so I can adopt environmentally friendly ones. And it works.

In San Francisco though, sustainability’s ingrained in the city’s culture. In Miami and Miami-Dade County, that’s not the case.

So until I see that collective, perceptual shift among Miamians toward sustainable living take place in all facets of daily life, I’ll remain dubious about Miami’s green initiatives.

From what I’ve learned, true sustainability isn’t a marketing gimmick. It’s a way of life.