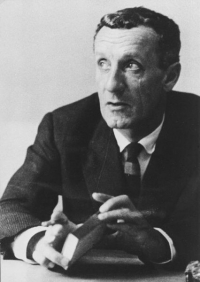 Community: from the Latin communis, meaning common, public, general, shared by all or many.

Phenomenological psychology as expressed by Maurice Merleau-Ponty is an exploration intended to illuminate the shared psychological meanings and structures that we live pre-reflectively in daily experience. He offers an elegant example at the beginning of the essay Science and the Experience of Expression:

One of the effects of language is to efface itself to the extent that its expression comes across. As I become engrossed in a book, I no longer see the letters on the page or recall turning each page. Through all the letters, an on every page, I continually seek and find the ‘same’ incidents, the ‘same’ events, even to the point of not noticing the light or perspective in which they are presented. (p. 9)

He renders this insight in a strikingly attentive, descriptive manner typical of the phenomenological tradition founded by Edmund Husserl. Merleau-Ponty shows us that language disappears, so to speak, when it succeeds in making its objects present to us. Bringing everyday occurrences to awareness—experiences so “ordinary” that they are lost in the pre-reflective flow of life which Husserl termed the “natural attitude”—exemplifies the phenomenological path of inquiry.

For Merleau-Ponty, the shared meanings in human life are intersubjective, not merely “subjective”. From this perspective, one’s lived-experience can never be accurately described as if it is merely the life of a isolated monad, severed from the rest of humanity. Even in seeming isolation, our experiences are shaped by and bear the traces of our interrelationships with others. Similarly, our discovery of meaning never occurs in a vacuum, but rather, in the world. M. Guy Thompson has published a nice overview of the implications of intersubjectivity for clinical psychology. (PDF)

Aloneness is what it is because it stands out to us upon the horizon of our remembered, anticipated, or imagined relations with others. We are always, in Heidegger’s words, “thrown;” we are in the world. For this reason in the Phenomenology of Perception Merleau-Ponty insists that “Truth does not ‘inhabit’ only ‘the inner man’, or more accurately, there is no inner man, man is in the world, and only in the world does he know himself” (p. xi).

Phenomenological reflection is an awakening of previously mute experience, an achievement of consciousness that enriches the human community. The understanding we aim at is neither abstract nor merely academic, but thoroughly existential: in The Visible and the Invisible Merleau-Ponty writes that from a phenomenological perspective “to understand is to translate into disposable significations a meaning first held captive in the thing and in the world itself” (p. 36).

The language of captivity and emancipation is not accidental. With greater awakening comes greater freedom: what is present to us stands out ever more clearly as what it is, and this frees us to more fully grasp and respond with integrity to others and to the situations we encounter. So Merleau-Ponty’s phenomenology has powerful ethical implications, particularly for those of us engaged in promoting inter-cultural, inter-ethnic, or interreligious understanding–even in a “postmodern” context characterized by profound skepticism about the possibility of transcending differences.

As Gary Madison wrote in his chapter “The Ethics and Politics of the Flesh” in The Ethics of Postmodernity, Merleau-Ponty says that “all appeals to the other, to, at the limit, the universal, are situated, since we can never transcend, metaphysics-wise, our own historical and cultural situations in such as way as to attain a suprahistorical absolute, [so] perhaps a better (postmetaphysical) term than universal would be transversal.  (p. 181)

So in Merleau-Ponty’s work we have an acknowledgment of the so-called “postmodern” situation in which we must fully acknowledge the ways in which our lives are situated, embedded in contexts that importantly shape our worldviews. As Terry Eagleton has pointed out, for many postmodernists this means we are locked in our own discursive worlds, we cannot bridge cultural differences, we cannot truly communicate across differences, and no ethical claims could possibly link us to the cultural other.

Not so for Merleau-Ponty: as Madison points out:

Unlike some of today’s ethnocentric ‘incommensurablists’ who deny outright the possibility of transcultural rationality, Merleau-Ponty never abandoned his faith in (the universalist) notion of humanity, i.e., his belief that, in spite of all the obstacles and difficulties that lay in their way, people can, with sufficient good will, always communicate and arrive at understandings which have some legitimate claim to universality, however tentative and ‘presumptive’ such claims might be. (p. 182)

So, Madison argues, “Merleau-Ponty’s ethics provides the basis for a politics of democratic, egalitarian praxis” (p. 182). Recent voices from Tahrir Square announce themselves as engaged in a struggle rooted in local realities while inspired by a “transcultural” conception of humanity that is the property of no single nation or culture.

When I began studying Husserl and Merleau-Ponty with Amedeo Giorgi in the mid-90’s, he told me “Phenomenology isn’t just a philosophy—it is a way of seeing.” My aim here was to convey a taste of that way of seeing.