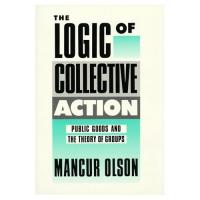 Why don’t we work together for the common good?

It’s a question that plagues every good intention, and every activist group. We know that corporate America is paying its executives outlandishly and its workers poorly – and that if we just banded together, we could do something about that.

We know that the global environment needs our stewardship:  that it’s crucial we find renewable power and resources, and organize our cities around sustainable growth policies.  And if we just banded together, we could make that happen.

Time after time, cause after cause, getting people to devote their time to causes that benefit them in the long run seems next to impossible.

Why is that?  Why don’t we come together for the common good?  After all, we want a sustainable environment … we want a healthier economy.  So what’s stopping us?

An often overlooked classic of economics holds the answer.  It’s because we’re rational.

In 1965 Mancur Olson published “The Logic of Collective Action,” which was his Harvard dissertation in economics.  In it, Olson took aim at the notion that rational people will band together to support the collective good.

That does happen in small and intermediate sized groups, he noted, but almost never in large ones.

A large group dedicated to solving a large common problem (like stopping a war or changing a nation’s environmental policies) has a unique set of challenges.  Specifically:

As a result, a “rational actor” (in economic terms) will not participate in large organizations to support the common good:  why spend time and money on something that you’ll get anyway, if your contribution can’t be seen as important?

This doesn’t happen in small and mid-sized organizations because other factors – especially social pressure – can be brought to bear.  Everybody knows if someone isn’t participating, and can tell them directly that it matters.  Likewise, small and mid-sized organizations generally tackle smaller and more manageable issues, and so one or two people are more likely to shoulder the entire burden because they’d rather do that than not receive the common good at all.  (If, for example, and organization is dedicated to running a neighborhood recycling center, it’s quite likely that a few members of the organization will end up shouldering most of the burden because they’d rather that happen then not have the recycling center at all.  But that kind of sacrifice doesn’t scale to national or global problems.)

Some large organizations that fight for the common good certainly do exist – but they tend to get their members because they offer “selective incentives.”  That is to say, they entice prospective members with something besides just saving the environment.

Olson’s conclusions are crucial to theoreticians and practical activists alike:  if we want to redesign our systems and our world, we might not be able to do it by getting people to just cooperate on large issues for the common good.  The incentives that the common good has to offer are all wrong.

Or, alternatively, it may be that the problem is we keep making rational appeals.  In the end, joining a larger cause, being part of a necessary movement so big that you can’t see where it begins or ends, may not be a rational act at all.  It may require a leap of faith.