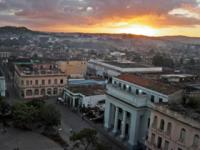 I remember looking up at the wooden beams and panels holding up the aged roof. My eyes studied its rugged patterns before moving across the room, finding little artifacts in almost every corner that continually brought the century-old structure to life.

This old building wasn’t a historic home in the U.S. or an old church in Europe. It was my great-great grandfather’s house in Santa Clara, Cuba.

Earlier this month, I traveled to the island with my mother and grandmother on a humanitarian visa to visit our relatives who still live there. This was my fourth trip to Cuba in a span of 19 years and it was as rich culturally as my first trip to the island was when I was 12 years old.

This most recent trip brought Renee Levi’s powers of place theory to life for me the moment we jumped in the car that took us from Jose Marti Airport in Havana to Santa Clara in central Cuba. The powers of place theory views locations as living centers that create a sense of wholeness in human beings. The theory asserts that all places channel a transformative power that we can feel when we’re in harmonious relationship with the location we’re in.

We passed countless farms and fields in rural Havana and Matanzas on our late afternoon drive to the center of the island—the fertile soil was as red as clay. I felt the transformative power of this imagery take hold of me as the fields began to rise and slope in the distance, forming a chain of hills that surround Santa Clara and link to the Sierra del Escambray, a mountain range in central Cuba.

Dusk turned to night and the darkened autopista (or highway) was lit by our headlights and bold, bright field fires as campesinos (or farmers) tilled the soil late into the night. Happiness swept over my mother and grandmother when they saw the tiny lights of their hometown sparkle in the distance. I remember feeling happy for them as we entered Santa Clara and assuming that, perhaps, the powers of place theory could simply be experienced vicariously.

The next day I learned that my assumption was wrong.

The powers of place didn’t hit me as we strolled through Parque Vidal, the town square in Santa Clara, or as we rode a horse-drawn cart through the city’s 300-year-old stone streets to get to our destinations. The powers of place hit me at our ancestral house, which was built by my great-great grandfather and his cousin more than 100 years ago.

My grandmother grew up in this house with her two brothers as part of a very large family filled with an array of cousins, uncles and aunts. Her mother—my great grandmother—was raised there too as one of nine siblings in an ever-growing family.

As I rocked back-and-forth in a living room rocking chair listening to my grandmother and her animated relatives reflect on the past and tell jokes, their voices almost brought the house’s past to life—as if their voices were echoes of generations already gone.

My grandmother’s relatives joyously told me about the house every chance they got—from describing the small backyard as a verdant, small field where my great-great grandfather, a carriage driver, used to grow and harvest crops to telling me about the front door and window being original to the house to describing the kitchen area as looking the same way it did around the time of my great-great grandfather’s death in 1964. They also showed me a picture of my grandmother and a few of her cousins standing on the dirt road (now paved) leading up to the house around 1938, when they were all young children. Up until that moment, we thought that no pictures of my grandmother as a child existed.

There I was, I thought, claiming my place in an ancestral lineage that was never part of my daily reality having been born and raised in Miami. I just knew the stories—the stories my grandparents told; the stories their relatives and friends who had also exiled to Miami told. I enjoyed validating those stories with our Cuban relatives in Santa Clara by asking, for example, about my great-great grandfather’s carriage, which I was told won numerous awards back in its heyday.

“When people gather—for a meeting, important conversation, healing experience or to create something new, the place and its surroundings affect the quality of the experience and its outcomes,” according to Renee Levi’s website, The Powers of Place Initiative. “Such special gathering places are of a distinct and different order. They are often described by their overall Gestalt, ethos or embodied felt-sense, as ‘aesthetically vibrant environments that come alive,’ places that feel like ‘coming home,’ ‘spaces that facilitate healing or generative thinking.’”

My great-great grandfather’s house came to life that day. It felt like home.