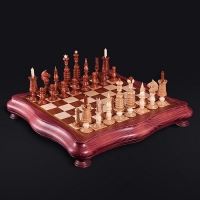 Here’s what he means: there’s no such thing as “creativity,” only endless copying, theme, and variation. “Everybody copies from everybody. The skill is in how large a fragment you choose to copy and how elegantly you can put them together.”

Cope is making more than just an argument with the idea that “nobody’s original” – he’s making music. Cope is the world’s foremost creator of computer programs that compose classical music, and his latest program, called “Emily Howell,” recently released its first album. In several cases, classical music scholars have been unable to tell an artificial intelligence created work in the style of Bach or Mozart from the original.

That music, Cope says, is proof that creativity, as we commonly understand it, does not exist – and that people are therefore little more than complex machines constantly crunching algorithms.

“The question,” Cope says in a recent article in Miller-McCune,”isn’t whether computers have a soul, but whether humans have a soul.” His answer is “no.”

But what exactly has Cope proved? Very little, according to faculty in Saybrook’s program in Creativity Studies.

For Creativity Studies MA program director Steve Pritzker, the heart of the matter is that the computer programs Cope and others design are constantly given instructions, feedback, and rules to follow from human beings: calling them “creative” for then spitting out a piece of music is like calling a calculator a mathematical genius for correctly calculating a formula that a human being devised.

“When you have humans doing the programming to imitate composers like Bach and Mozart,

then all they are doing are copying and recombining patterns,” Pritzker says. “It is kind of interesting and creative on the part of programmers that they can do that just as they can program chess playing computers to figure out all the possibilities and make moves accordingly. Eventually you might even get an original work by chance, which reminds me of the idea that if you put a thousand monkeys in a room with typewriters for an infinite amount of time eventually they would duplicate all the great works of Shakespeare. Bob Newhart used to do a bit about the guys working in there reading everything the monkeys type. He gets excited: ‘Wait a minute, I think I’ve found something here — To be or not to be, that is the gozornan platit.’

But what computers can’t do, Pritzker says, “is capture the originality and experience of a human being. Great art depends on factors such as sensitivity, insight, motivation and emotion. A computer can’t experience those things except artificially — and so they produce artificial stuff.”

Even Cope admits that for all his programs’ prolific output – literally thousands of compositions in the styles of Bach, Rachmaninoff, Mozart, and others (and that’s just while he was out getting coffee) – he has yet to produce a masterpiece.

All he ever wanted was to write something truly wonderful, and he doesn’t think that’s happened yet. As a composer, Cope laments, he remains a “frustrated loser,” confused by the fact that he burned so much time on a project that stole him away from composing. He still just wants to create that one piece that changes someone’s life — it doesn’t matter whether it’s composed by one of his programs, or in collaboration with a machine, or with pencil on a sheet of paper.

Is the only reason why a computer has yet to create a composition – in the style of Mozart or in any other way – that can be considered a life changing masterpiece because we just don’t have good enough computers?

Yes and no, according to Dean Keith Simonton, a Distinguished Consulting Faculty member for Saybrook’s Graduate College of Psychology and Humanistic Studies.

“Insofar as creativity entails ideational combination, both mind and machine should do equally well,” he says. Computers will get better and better at it. But even then, the way computers go about approaching a problem is fundamentally different from the way people actually do.

“To be sure,” Simonton says, “you might argue that current computer chess programs play much better chess than their programmers do, but this is only accomplished by relying on brute-force processing. If these programs had to play chess like a grandmaster, they would fail.”

People are not brute force processors: they make leaps in logic that have nothing to do with either induction (which computers are capable of) and deduction (which they are capable of in limited circumstances). “Almost all human beings can carry on a reasonable conversation on a wide range of topics, yet no computer program yet devised can do so on even a very narrow topic,” Simonton says. That’s not an accident – it’s the result of different approaches being used.

This is clearly demonstrable in a number of ways, says Ruth Richards, one of the foremost contemporary experts in creativity and faculty in Saybrook’s Creativity Studies program. There are more fundamental reasons – and they involve aspects of creativity that Cope doesn’t address.

“Yes, sometimes we can solve puzzles with logic and trial and error. But sometimes it takes intuition and a little bit of magic,” Richards says. “Investigators including Kounios and Jung are even showing neurobiological differences between the logcial vs. intuitive approaches using EEG and fMRI. We, as in Saybrook Creativity Studies people, also think this involves new and multiple altered states of consciousness, which creative people can learn to orchestrate, sometimes in marvelous ways.”

There is a clear link for some, Richards says, between creativity and spirituality … indeed, the very word “inspiration” has both creative and spiritual connotations. But can a machine find spirituality, even transcendence?  There is also strong evidence that many people must express themselves creatively in order to be happy and fulfilled – something that distinguishes “creativity” from simple algorithmic computation – and creativity has multiple therapeutic benefits.

There’s also ample evidence that art has led people down a spiritual path, and that much of the world’s great art came from spiritual traditions andoften can produce awe and wonder. Throwing that aside because it doesn’t fit neatly into an algorithm is missing obvious evidence about what creativity is and how it can work.

“It’s not all about throwing coins and choosing,” Richards says. “There are many forms of creativity, from mundane to magical. Cope’s work is impressive, but it’s just one kind of creative activity.”

Which is why Richards, and many contemporary scholars of creativity, can say that “nobody’s original” gets it entirely wrong: “everybody’s creative” is a far more accurate maxim, because it’s part of what we, as human beings instead of machines, experience every day.