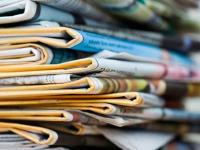 That was the first time the media mogul predicted the newspaper industry’s inevitable death, blaming its stale format for its eventual demise. He assumed the death would be quick and painless as more and more readers became viewers of his brand new cable news venture, CNN. Turner gave the newspaper industry 10 years tops.

Almost 30 years later, newspapers are still around and people still read them, albeit in smaller numbers. Turner wasn’t entirely wrong though. The industry is dying—a very slow and agonizingly painful death at the hands of the same electronic rivals that have also dented CNN’s ratings in recent years.

One hundred years ago, it was easy to assume people would always buy newspapers to read about current events at home and abroad. The newspaper industry latched on to that notion so tightly, it failed to consider how changing trends and technologies would affect sales and future growth. Newsrooms and newspapers led by management dedicated to journalism figured objective news gathering was a competitive advantage that could never be surmounted.

Boy, were they wrong.

Even as the Internet emerged 15 years ago, the industry held fast to its denial that readership would change. Now, newspapers are playing a reactive game of online catch-up to compete against rivals, like Google News, Yahoo! News, personal blogs, YouTube, Facebook, Twitter and a multitude of media outlets that all deliver information targeting specific niche groups in different, online formats.

Years of this change aversion caused readership to dwindle, subscriptions to drop, print advertising revenues to fall and production costs to rise. Some newspapers with histories dating back more than a century have folded, like Colorado’s Rocky Mountain News. Others have implemented short-term fixes to keep production going.  In 2008, The Dispatch of Lexington, North Carolina, for example, stopped publishing the Monday edition of its paper in an effort to cut production costs. Washington’s Seattle Post-Intelligencer stopped publishing its print edition and only offers the publication in an online format.

The problem isn’t limited to individual newspapers. It’s also plaguing the companies that own them.

Four years ago, I witnessed the collapse of print monolith Knight-Ridder Newspapers while working for the company as a bureau reporter in North Carolina.

At the time, I knew very little about shareholder revolts, corporate buyouts and the profit-making mechanisms that drive the newspaper business. I was 26 and more interested in the art of journalism than the business mechanics of the newsprint machine so I failed to notice Knight-Ridder’s rustication.

Circulation figures had dwindled, print advertising revenues had dropped, production costs were rising, morale was at an all-time low, the turnover rate was soaring, stock value slumped and shareholders were angry. So angry, corporate set aside its feeble attempts to save Knight-Ridder from extinction and sold the company to the highest bidder, which wound up being The McClatchy Company.

After five months in a politically-charged bureau worrying whether my job would be cut, white-knight McClatchy vowed to keep everyone onboard and capitalize on synergies between its existing and new Knight-Ridder newspapers. These “synergies” were actually redundancies and market oversaturation. My bureau, for example, had always competed against McClatchy’s hometown paper. Now we were supposed to work together? So once the synergies kicked in, if I’d write a story it would run in both our section and in the former competitor’s paper too? The fusion didn’t make any business sense whatsoever.

The more emails corporate enthusiastically sent, the more erroneous the plans seemed, especially with all the factors that drove Knight-Ridder out of business still at work in a highly competitive, toxic work environment that offered very little room for growth.

I left to pursue a business degree. A year later, McClatchy slashed hundreds of newsroom and staff jobs at its newspapers nationwide in an effort to control costs and improve its revenue stream. It downsized a few more times after that. Other corporations did the same, including Landmark Communications.

The industry can do better.

A sustainable business model for journalism must meet present needs while ensuring that resources are available to meet changing, future needs. It calls for foresight and flexibility. Organizationally, its culture fosters growth for both the company and its employees.

The flexibility begins with top management letting go of the notion that newspapers, and newsprint, will always be in demand. Circulation is declining, while the growth of online media consumption shows no signs of stopping. A sustainable approach means folding costly print editions to focus on developing and enhancing web content, interactive features, and online advertising.

It is unfortunate that the elimination of production and delivery costs, a necessary step towards sustainability, would also include the salaries of production managers and workers – that’s always a difficult decision. But with readership shifting online and hundreds of unsold print copies piled up at newspaper distribution sites every day, these jobs are currently creating more expenses (and material waste) than gains. Ironically, the newspaper industry has retained this costly aspect of the business while sacrificing its true commodity: writers and editors.

Rather than let go of its content-creating talent, a sustainable business model calls for employee retraining along the lines of online print. It would encourage its newsroom staffers to tap into their passions or hobbies and blog about them through the newspaper’s Web site to generate niche-oriented followings. Top management would also seek to retrain its managing editors and middle managers along the lines of business so they better understand the repercussions of the decisions they make every day. Continual teaching and training is a company investment that fosters the kind of personal growth that will funnel back to the newspaper through increased productivity, creativity, insightfulness and innovation.

Cultivating creative talent and training for originality is critical because competing online calls for innovation not mimicry. This is as true for web development as it is for content, and management should strategically align itself with cutting-edge software companies that are ahead of the curve on web trends and mobile applications. The focus shouldn’t be fads or novelty in the long run. Instead, the focus should be making the newspaper an online, interactive library chronicling stories through words, pictures, videos and multimedia presentations. The online newspaper would serve as a library or repository full of information that will keep readers engaged and happy just surfing the site.

I should note that most newspapers have implemented many of the suggestions I’ve made. These suggestions, however, have been implemented individually as short-term remedies rather than as part of a larger business model to ensure survival beyond a year or two or five or 10.

The newspaper industry is far from fully transitioning to a sustainable business model and, at this point, it’s unknown how long it will take before its ink completely fades.

NOTE: This post was originally published by the blog Triple Pundit on October 18th, 2010.