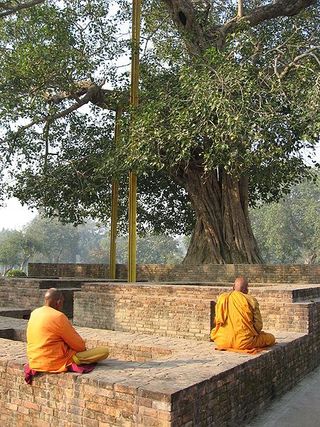 Recently the federal Financial Crisis Inquiry Commission concluded about the 2008 economic collapse:  “there was a systemic breakdown in accountability and ethics.”

It goes on:  “Unfortunately – as has been the case in past speculative booms and busts – we witnessed an erosion of standards of responsibility and ethics that exacerbated the financial crisis.”

This isn’t limited to the past, either:   lack of accountability and ethics is prevelent all over the business world. How do we encourage ethical decision making in business? If ethics courses in business school did the job, we wouldn’t have had a financial collapse in the first place.  Two researchers offer another solution.

Doctoral Student Nicole Ruedy and Maurice Schweitzer professor at the Wharton School of the University of Pennsylvania have published a report called “In the Moment: The Effect of Mindfulness on Ethical Decision Making”, in the February issue of Journal of Business Ethics.

Mindfulness is a calm awareness of the body, emotions, and our thoughts. That calm awareness increases our ability to be aware of what going on within and outside of ourselves; like a wide or expansive viewpoint.

The authors consider how this greater awareness can impact the ability to make decisions, especially ethical decisions.

Why do we behave unethically? Ruedy and Schweitzer name several sources of unethical behaviors. We all know a few. We want to take credit for success and ignore failure;  we lie to ourselves;  we are unconsciously biased;  we’re not paying attention to the results of our actions.   All these elements combined make a dense fog that clouds our ability to see ethical challenges or conflicts of interests when making decisions.

Imagine being so focused on getting that brokerage commission that you sell a mortgage to someone who you know can’t really afford a home. There’s a good amount self-deception, focus on material success, and biases at play here.

How can we help people see through all our muck and make better decisions? Mindfulness training?

Ruedy and Schweitzer had four hypotheses for their research

People who make good decisions will most likely do so in order to have honesty and integrity rather than a bigger car or house. Mindfulness will prevent people from making decisions that slide down that slippery slope “success at any cost.”

3)      Mindfulness will not only affect unethical behavior but also impact how we make decisions. That decision making process will be based on,

4)      Mindfulness is associated with honoring principles rather than outcomes.

Two results came from their studies.

They found that those participants that were mindful made more ethical decisions. Given the chance to engage in unethical behavior, those who were more mindful still so, but to a lesser extent than those who were not mindful.

The authors suggest that mindfulness can help prevent people from making decisions that lead to ‘slippery slope’ actions. Yes, it’s may not be a big deal this one time, but that one time can add up to many times then ultimately slipping down a slippery slope.

Mindfulness training in organizations could help to promote ethical decision making. This could be for management training and even for employees when they are making choices everyday and every moment while at work.

Mindfulness increases our awareness about ourselves and how we chose to behavior. Unethical behavior comes out of a place of lack. When there is lack, many want to fill the void with more and do it quickly. Being mindful requires that we stop for a moment and consider how what we are doing may impact not only our lives but the lives of others around us.

Mindfulness may not be the only training to encourage ethical behavior but it can certainly help “close the gap between their admirable moral aspirations and the reality of their ethical decisions in everyday life”.