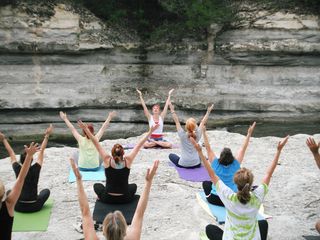 In the 20th century the popular metaphor for therapy was “the couch” – the therapist’s couch, Freud’s couch.  What did you do when you went to therapy?  You lay down on the couch.  It was almost a cultural cliché.

It won’t work for the 21st century.  More and more, psychology is telling people to get off the couch and get moving.

That’s because mind-body therapies, especially with a humanistic emphasis, are increasingly being shown to have a significant positive impact for people with a range of problems – including not being able to get off that couch.

Yoga, in particular, has recently been shown to have a host of benefits:

1.) For those that struggle with Binge Eating…

Researchers at Deakin University in Australia have found a positive correlation between yoga and binge eating. In a twelve week yoga program, participants diagnosed with eating disorders; specifically binge eating, practiced yoga on a daily basis specifically focusing on mindfulness, non-judgmental awareness, and generalized acceptance. At the end of the study, participants reported a decrease in binge eating, higher self-esteem, and positive body images. And, more, across the board, the BMI of the sample population decreased in hip and waist dimensions.

2.) For veterans and all others that struggle with Post Traumatic Stress Syndrome (PTSD)…

Psychiatrists at New York Medical College have found yoga to significantly impact depression and post traumatic stress syndrome in survivors of natural disasters. After just four days, all sixty people in the sample population of the study scored significantly less on scales measuring depression and PTSD symptomotology. After significant time, the symptoms of the sample population were measured again, and the positive results from the addition of yoga into daily life continued.

3.) For those who are battling cancer or are recovering…

Dr. Karen Mustian, at the University of Rochester Medical Center, found yoga to be a success non-pharmacological treatment to insomnia in patients recovering from cancer treatment. The sample population consisted of four hundred and ten post treatment cancer survivors; each of whom participated in yoga for a four week period multiple times a week. In the beginning and at the end of the study, participants filled out self-report measures accessing sleep quality and quality of life. Research from the measures demonstrated a positive correlation between yoga and the quality of sleep and life for post cancer treatment patients.

Lynn Waelde, a psychologist at the Pacific Graduate School of Psychology summarizes the psychological benefits of yoga stating, “When we teach yoga, we teach people to let go of physical tensions…when you sit them in a chair in meditation, they get it. It’s an easy step to see how you can breathe and focus on emotional or mental tension and let it go.”

So, the next time you head to the gym, grab your yoga mat and know that your sixty minute class is providing even more than physical exercise, it is indeed providing a sanctuary for your psyche.